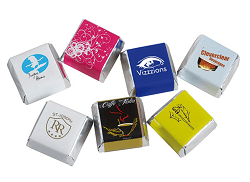 In the UK we typically consume an estimated 660,900 tones of chocolate each year with an every of 3 bars per week or 11kg per person per year. Chocolate appeals to a very wide demographic and modern manufacturing and packaging techniques mean that there are more varieties, shapes and tastes available than ever before. It’s no wonder that chocolate is also an important ingredient in the marketing mix of many companies and organisations.

A Brief History of Chocolate

We tend to think of hot chocolate drinks as a further invention to the humble chocolate bars, snacks and individual chocolates supplied in boxes that we know so well today. The history of chocolate reveals that chocolate drinks came first and started to appear around 350 BC.

It was the Aztecs who first started to farm and harvest chocolates. They believed that the Cacao seeds were a gift from their gods and were so valuable that they were used as a currency. An Aztec hot chocolate was so different to the drinking chocolate that we use today. Their drink would have been bitter and mixed with spices (chilli) and corn puree. The drink was believed to provide aphrodisiac powers and strength to the drinker. The word ‘chocolate’ derives from the Spanish language. Drinking chocolate arrived in Europe around the 16th century and became more popular when sugar was added to it.

Chocolate is derived from the bean of the Cacao tree, a native of the Mesoamerica territory. The bean is brownish-red and almond-shaped and is harvested from a sheath that hangs from the tree. The beans themselves are bitter due to the alkaloids in them and there is evidence that they could have been fermented as early as 1400 BC to produce an alcoholic beverage. Today most of the world’s chocolate is grown in Western Africa.

To turn the Cacao beans into the chocolate requires roasting at a temperature of between 120-149ºC. This develops the brown colour. The beans are then crushed to release the ‘nib’ which is extracted from the debris following placement in an air tunnel which blows the shell fragments away. The nibs are then grown down into a thick brown liquid called a cocoa mass. The mass is then pressed to release the cocoa butter and powder.

It is the cocoa powder that is used in drinking chocolate, confectionery and cooking. To create chocolate bars, the cocoa butter and cocoa mass is combined with sugar and milk in varying proportions. The process is stirred over several days (referred to as ‘conching’) to create a chocolate with a smooth texture. The chocolate is then cooled slowly (referred to as ‘tempering’) and the resulting mixture (referred to as ‘couverture’) is the basis for most of the chocolate bars, individual chocolates, chocolate spreads, flavours and toppings consumed today. Other ingredients may be added including milk, vegetable fat, nuts, nougat, fruits, mints and chilli spices.

The 19th Century saw many developments as chocolate manufacturing became more industrialised. A Dutch Chemist (Coenraad van Houten) introduced alkaline salts to reduce the bitterness in 1815 and in 1828 he created a press to half the cacao butter fat which allowed for a more consistent chocolate mixture. In 1847 Joseph Fry introduced moulded chocolates in the shapes of the first chocolate bars and individual pieces. Lindt and Sprüngli was another pioneering chocolate company that started out in 1845. Others include Nestlé and Cadbury as well as the US-based Hershey company.

For hygiene and to prevent melting, chocolate products must be packaged and stored properly. Even when we buy individual chocolates from a confectionery shop today, the chocolates are put into a paper or plastic lined paper bag, cardboard box with a plastic tray, tub or tin. The chocolates may be even individually wrapped as are chocolate bars.

Packaging has always played an important role and the first chocolate bars and boxes had printed wrappers to advertise their contents, brand and the company that manufactured today. For most promotional chocolates the packaging forms the central branding point. Some individual chocolate products also offer the opportunity to mould the logo into the chocolates themselves. An example would be a chocolate coin or 3D moulded chocolate bar. Some chocolates can offer an edible top that can also be logo printed.

Chocolate has always been considered a treat and one for special occasions. Its consumption is associated with many national and religious holidays and calendar dates. Classic examples include advent calendars for Christmas, Easter eggs and chocolate bunnies for Easter and Valentine’s Day. For promotional marketers these events also provide an opportunity for companies and organisations to promote themselves with a branded chocolate product.

Aside from seasonal marketing campaigns, branded chocolates can also be used for other types of marketing campaign including giveaways at events and general as a general ‘thank you’ to new and existing clients in the form of boxes and chocolate bars. We tend not to recommend their usage at events such as exhibitions and tradeshows where the ambient temperature may be higher leading to a softening of the product. Where you can distribute the chocolate within a moderate temperature environment there is no end to the marketing possibilities.

Chocolates remain a firm favourite marketing product for many organisations. They can be used for wide variety of customer and potential client interactions and touch points and always go down well. As well as the traditional types, sugar-free, diabetic and lactose-free types are also available as well as chocolates made from Fairtrade materials (https://www.fairtrade.org.uk/Farmers-and-Workers/Cocoa) and some flavoured with alcohol.

There is no doubt as to the future for chocolate. It is guaranteed to remain a firm favourite whose popularity will continue to grow with each new generation of consumer. More Avant Garde flavour combinations will continue to evolve but the mainstream flavours will remain as milk, dark and white chocolate and there will continue to be national and regional tastes and preferences.

Next Article - Chocolate's Place In The Marketing Mix